Some very important visitors were brought to Hall Place by the famous Taxi Charity for Military Veterans on the 5 November, to mark Remembrance Day, the centenary of the 1918 armistice and to help unveil a new statue and bench.

Eight black taxis brought the 17 veterans to Bexley from all across the south-east. On arrival they were taken on a guided tour of the Hall Place ‘Faces of the Great War’ and the ‘Code name – Santa Fe’ exhibitions before leaving for the gardens, where they spent some time helping pupil governors from Gravel Hill School to sow poppy seeds. The children also heard why the poppy is used as a sign of remembrance.

To watch a video of the day click here 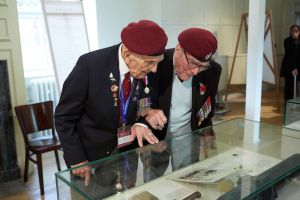